The brothers of Phi Beta Sigma are the Fraternity’s most valuable resource and strength. They are the primary means by which the Phi Beta Sigma objectives will be achieved. In order to accomplish the Fraternity’s objectives, it is essential that systems are instituted that effectively embody “Culture For Service and Service For Humanity” and promote brotherhood, scholarship and service.

One spring day in 1969, there was a parade on the Seawall in Galveston when Band Director, Edgar Thomas, saw a man in a Sigma sweater, Michael Daniels, standing on the curb watching the parade. They shared personal information and started finding other Sigma’s in the county. The meeting continued on a monthly basis until enough brothers would accept the challenge of starting a new chapter in Galveston. Finally on June 2, 1970, the charter was presented to us by Brother John E. Westberry, Regional Director of the Lone Star Region. (See the attached pictures) The Brothers at the time were Ben L. Cavil, H. Michael Daniels, Pino C. Burns, Jullian Byrd, Leroy Bluitt, Alfred Goodwin, and Edgar Thomas.

The group of Brother planned their first smoker to reactivate other Sigma’s in the county. On November 18, 1970, the smoker was held in the home of Michael Daniels and Ben L. Cavil was elected as president. Two more joined us at that time and we continued to meet monthly mostly in a brother’s home, either on the island or the mainland.

During our pre-chartering time period, we affiliated the fraternity with the Galveston County Council of Greeks, a consortium of black fraternities and sororities.

The membership grew over the next few years until we had approximately 20 brothers in the chapter. A major milestone in the history of the chapter occurred, in 1974. This is the year we hosted a Regional Conference in Galveston at the Galvez Hotel. Of major importance at this conference was the change from a one state region to a two state region, marking the end of the Lone Star Region and the beginning of the Gulf Coast Region. The state of Louisiana was leaving the Southeast Region and merged with Texas for the newly created region.

In the years that followed, the chapter focused on activities to promote the fraternity’s national programs. Some of those events included voter registration booths, “War on Illiteracy “ banquets, “A Fight Against Illiteracy” banquets, recognition of local black businesses, restoration of Lincoln Auditorium, and “Help the Elderly – Repair Project”.

In 1983, the chapter hosted another Regional Conference for the Gulf Coast Region. This event was well attended by the Brother’s and their families from across the states. Since the chapter’s inception there have been many Chapter Presidents. They, include Ben L. Cavil, Michael Daniels, Pino C. Burns, Edward Ross, Clarence Sims, Kevin Yancy, Stanford LeBlanc, Q. Byron Winters, David Livings, Victor Taylor, Rick Rawls, Bertran Bilton, and Shelby Johnson. 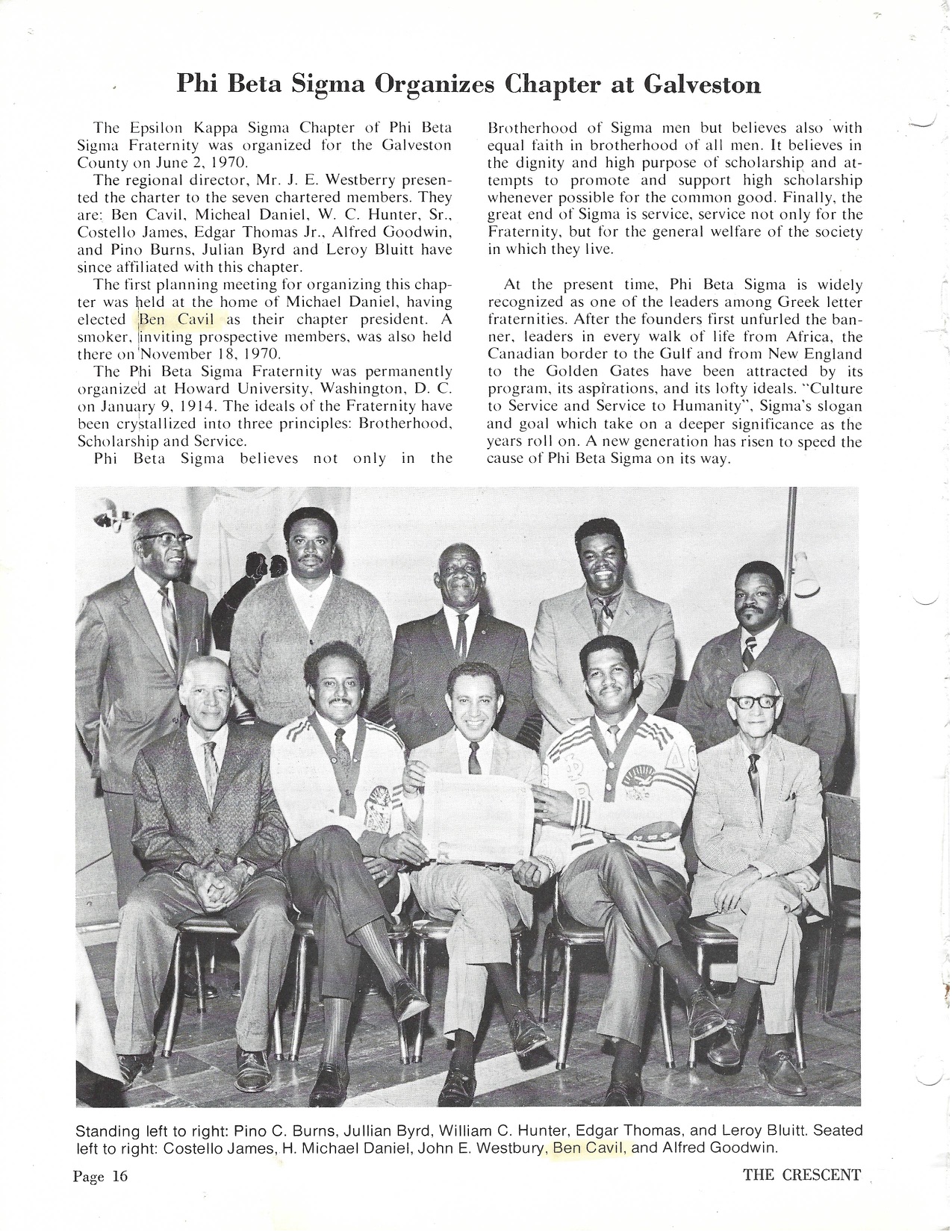 To be a prospective member click on call to action, fill out form.

This is an example widget to show how the Right Sidebar looks by default. You can add custom widgets from the widgets screen in the admin. If custom widgets are added then this will be replaced by those widgets.